Not Peds But a Fun SLP Share: Klingon Language Helps Man with Dyslexia 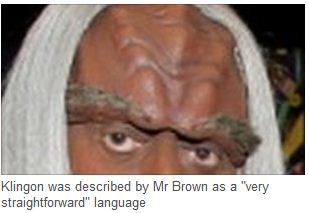 [Source: BBC News]
A UK man has revealed how translating “Klingon” has helped him deal with dyslexia.
Jonathan Brown, 50, of Furzton spent 12 years learning the fictional language of the alien race from Star Trek films.
Then, after being appointed as the lead “linguist” on a CD for others wanting to learn it, he found a different way of dealing with words.
He said: “It helped me identify my problem and found a way of working with my dyslexia.”
Their language was invented by Marc Okrand, for use in some of the films.
But rather than just inventing a few words to make them sound alien, he devised a complete language, with its own vocabulary, grammar, and usage.
Mr Brown, who is married with two children, said that he always loved the original TV series and first became interested in the language after discovering there was a Klingon dictionary.
“I had to buy it just to see what was going on. Then reading it and learning it, it was just so much fun.
Read the Rest of this Article on BBC.com