Researchers Solve Longtime Puzzle About How we Learn 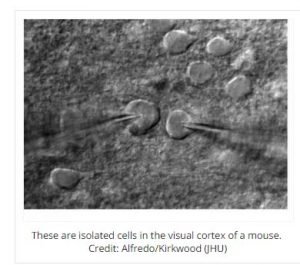 More than a century ago, Pavlov figured out that dogs fed after hearing a bell eventually began to salivate when they heard the ring. A Johns Hopkins University-led research team has now figured out a key aspect of why.
In the current issue of the journal Neuron, neuroscientist Alfredo Kirkwood settles a long-running debate in neurology: Precisely what happens in the brain when we learn? In other words, neurologically speaking, how did Pavlov’s dogs learn to associate a ringing bell with the delayed reward that followed? For decades, scientists have had a working theory, but Kirkwood’s team is now the first to prove it.
“If you’re trying to train a dog to sit, the initial neural stimuli, the command, is gone almost instantly — it lasts as long as the word ‘Sit,'” said Kirkwood, a professor with the university’s Zanvyl Krieger Mind/Brain Institute. “Before the reward comes, the dog’s brain has already turned to other things. The mystery was, ‘How does the brain link an action that’s over in a fraction of a second with a reward that doesn’t come until much later?'”
Read the Rest of this Article on Medical News Today