Roots of Language in Human and Bird Biology: Genes Activated for Human Speech Similar to Ones Used by Singing Songbirds 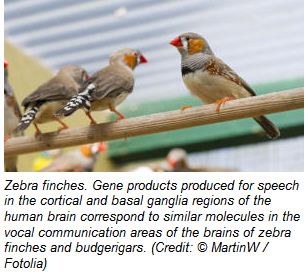 The genes activated for human speech are similar to the ones used by singing songbirds, new experiments suggest.
These results, which are not yet published, show that gene products produced for speech in the cortical and basal ganglia regions of the human brain correspond to similar molecules in the vocal communication areas of the brains of zebra finches and budgerigars. But these molecules aren’t found in the brains of doves and quails — vocal birds that do not learn their sounds.
“The results suggest that similar behavior and neural connectivity for a convergent complex trait like speech and song are associated with many similar genetic changes,” said Duke neurobiologist Erich Jarvis, a Howard Hughes Medical Institute investigator.
Read the Rest of this Article on Science Daily