Sam Berns – "My Philosophy for a Happy Life"

Editor’s Note:  You may have already seen this TED Talk by Sam Berns.  It has gone viral this past week since Sam lost his battle with the aging illness – progeria.  What an amazing young man. 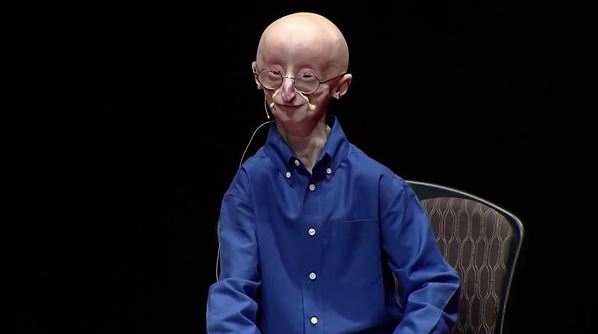 [Source:  The Boston Globe,  January 11, 2014]
Sam Berns was scheduled to serve as an honorary captain at Saturday night’s New England Patriots playoff game. Instead, the team planned to hold a moment of silence before the game in his honor. The Foxboro high school student, whose battle with progeria inspired a monumental effort to treat the rare and little-understood “accelerated aging” disease, died at home Friday night from complications of the disorder, his parents by his side, according to a family friend.  He was 17.
When Berns was diagnosed with progeria as a toddler, doctors told his family he might not live past 13.
His parents, Leslie Gordon and Scott Berns, both doctors, worked to further understanding of the disease. Gordon began a research campaign that brought children with progeria to Boston from all over the world.
In 2003, she and her team isolated the gene that causes the condition, and they have since identified drug treatment that has helped prolong lives of children such as her son.

Their work on behalf of progeria patients is the subject of the feature film “Life According to Sam,” which was recently shortlisted for a nomination in the Academy Awards’ documentary category. The exposure has brought widespread recognition and a fund-raising windfall to the Progeria Research Foundation, a nonprofit based in Peabody, established and directed by Sam’s aunt, Audrey Gordon.

Patriots owner Robert Kraft, after being introduced to Sam Berns and attending the HBO premiere of the documentary in New York in October, made a $500,000 matching pledge to the foundation. Sam Berns, an avid sports fan who played the snare drum in the Foxborough High School marching band, was invited to a Patriots
Read the Rest of this Article on the Boston Globe.com
Watch Sam Berns’ TED Talk