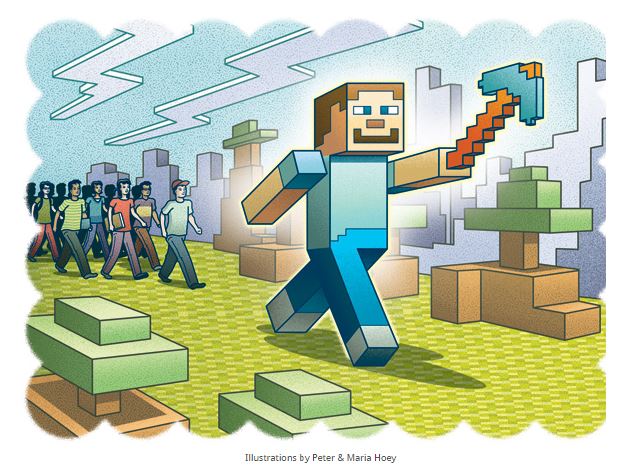 Walking through a vast network of medieval streets and houses, it’s easy to get lost. Luckily, I can fly. So I can see that up ahead, a team is building a castle with parapets and a wide moat. Someone next to me is posting signs with historical facts about the city. In outlying areas, people tend farms and raise livestock. Below, another team is creating a vast network of dungeons and prison cells.

I’m in Minecraft, of course—the phenomenally popular, open-ended game that places players in a world in which they can live and build things infinitely. Marcus “Notch” Persson, the Swedish creator of Minecraft, started out by creating a simple game, allowing players to construct whatever they wanted, using a few different colored blocks, each equivalent to one cubic meter. Released in 2009, it has evolved into a massive, world-building video game in which players uses those blocks to create anything they can think of, from houses, caves, and machines to a scale version of the Death Star. Microsoft purchased Minecraft from Notch and his team for $2.5 billion in November 2014.

Read the Rest of this Great Article on School Library Journal