SLP Corner: Bring a Guitar to Speech Therapy for a Rockin Good Time 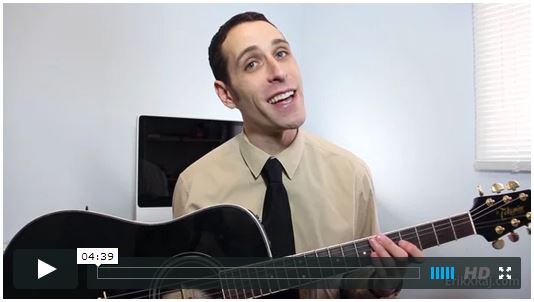 By any chance, do you play a musical instrument? And don’t worry, I’m not asking you if you’re a pro at your particular instrument. All I’m wondering is if you play a little bit. If you do, that’s VERY cool because I have another question for you. Do you actually own the given instrument that you play a little bit? If your answer is yes, then you simply MUST give the following speech therapy idea a shot because it has the potential to cause a ROCKIN’ good time within your speech therapy room.

Bring your instrument to speech therapy!

I’m not the greatest guitarist in the world, but I can play a few songs. So not too long ago, as I was strumming my guitar in my apartment, I came up with a gem of an idea. I started to think about what it might be like if I actually took my guitar to work one day. How would my students react to this? Was there a way that I could incorporate playing my guitar into a speech therapy session? Would my students and I be able to create fantastic tunes together? Or would our music sound something like nails on a chalkboard? Haha!

I gave it a shot and I was pleasantly surprised!
Right off the bat, when I brought my guitar into my speech therapy room, each and every single student on my caseload was surprisingly interested in it. It’s not all that common to see a musical instrument in speech therapy, and that’s what it’s all about . . . doing things in speech therapy that are a bit off-the-wall, in hopes that it can trigger a tidal wave of excitement that would cause students to continue to want to work on their speech therapy goals and objectives. From 1st graders to 7th graders, each kiddos’ eyes lit up the second I showed them the guitar.
Would you like to start a band?
I had a pair of students who where working on perfecting their /L/ sounds, so I told them that it might be fun if we could start a speech therapy band. These 2nd graders loved the idea and they both immediately started to come up with band names, but I interrupted them and told them that since we were working on our /L/ sound, our band names had to contain their target sound. They were totally okay with that and had no problem coming up with /L/ names like:

What about the lyrics?
After we solidified our band name(s), we started to write simple lyrics that contained loads of /L/ words. After we wrote out some sentences, I encouraged them to sing the sentences while I played the guitar. Some of my students were a bit embarrassed to sing, but that didn’t stop our band from ROCKIN’ out because we came up with the idea to sort of just yell the lyrics. (Don’t worry, we weren’t yelling at the top of our lungs, just shouting a teensy bit). And guess what? By shouting the lyrics, it opened up a great conversation that revolved around when shouting was appropriate and when it was not. They clearly communicated to me that a library was a location where shouting was forbidden, but a playground was a location where shouting was acceptable. Hooray for sneaking in some language-based stuff into an articulation session!
In closing . . .
Boy oh boy, the songs my students came up with were fabulous and towards the end of the session, I even let each student try to play my guitar. I was quite impressed with how each youngster respected the instrument and treated it with care and kindness. All in all, it was super fun and I encourage you to give something like this a try if you play an instrument. Do you play a tambourine? How about an accordion? Maybe your students would get a real kick out of seeing and interacting with an instrument while they were in speech therapy. So give it a shot because I know you could come up with some neat ways to target articulation, language, and so much more with your given instrument. YOU ROCK!

Erik X. Raj, M.S., CCC-SLP is a practicing speech-language pathologist and app developer living in Detroit, Michigan.   Originally from Jackson, New Jersey, he received his B.S. from Richard Stockton College of New Jersey and was awarded a M.S. from Misericrodia University.

You can learn about Erik’s apps for speech-language therapy and read his blog on erikxraj.com