by: Melanie Potock, MA, CCC-SLP
As a speech language pathologist who specializes in feeding, I can’t resist combining speech and language lessons with food activities.  Here’s my method of teaching colors while learning about new foods!

Blue with Blue!  Red with Red!

One of the first language concepts parents enjoy teaching their preschoolers is colors – but did you know that learning to identify “blue” begins with learning to match two blue objects? I teach children the primary colors of the rainbow: red, orange, yellow, green, blue, and purple (add pink if your little princess identifies with that one early on!) in a hierarchical process, beginning with matching two colors.  Start with red and blue.  Keep in mind that the most common form of color blindness is difficulty distinguishing between red and green or between blue and yellow.  Save those pairings for later in this process.
While I often start with Legos™ or colored balls when learning to match colors, food works beautifully too!  If you have a child who is hesitant to try new vegetables, this is the perfect opportunity for him/her to learn to simply pick up a new food and drop it in a bowl without the pressure of having to bring it to the mouth.  Starting with two solid white or solid black bowls, place a piece of red pepper in one bowl and a blueberry in another.  Pick up another piece of pepper and hold it in front of the child, and say “Red with red,” encouraging the child to take the pepper and put it in the bowl with the other red pepper.  At first, additional cues may be needed to guide the child, such as lifting the red pepper bowl into the air just slightly, or pointing to the bowl.  Over time, fade those cues as your child learns to distinguish between the two colors.  Once two colors are mastered, add a third color and a third bowl.  Be sure to present the foods in random order so that your child has to pause, look and process which color goes in which bowl. 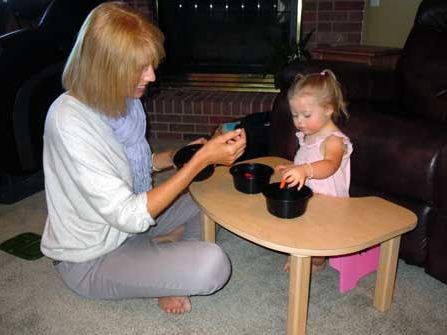 Orange with Orange & Red with Red!
Roll Blue Down a Celery Shoot!
Once six to seven colors have been mastered, move on to teaching your child to  imitate color names.  Say “blue” and pause before handing the blueberry over to the child, allowing up to 3 seconds for him/her to repeat “blue”.  Try rolling blueberries down a celery shoot after each time he/she imitates “blue”.   Finding fun and silly ways to reward your child is much more reinforcing that just saying “good job!”
Next, children begin to label colors on their own.  The best way to teach labels is to “bombard” the child with one color all week and mix in the occasional “other” color.  “I see blue!” is a favorite game at this stage.
Finally, the child learns to discriminate and find colors:  Say “Find blue!” and the child picks up the blue object among a field of one other color, such as a piece of yellow pepper among a field of red peppers, spread out on the kitchen counter.   Simply add other colors as the child’s skill progresses.  Soon, the two of you will be playing “I spy yellow!” throughout the produce section of your local grocery store.
Colors Can Expand the Palate, Nutrient Intake, & Literacy
In the process of learning colors, children can learn to eat a rainbow!  Blue and purple foods include purple potatoes and plums; green foods include asparagus, edamame and peas; yellow foods include squash and pineapple; orange foods include orange peppers and dried mangos; and red foods include tomatoes and red beans.  Introduce other colors, such as brown or white, using the same process.
Did you know that matching objects and colors is actually an early literacy skill?  It’s one of the first steps to learning symbols (letters) and understanding that two things go together  – they match!  And you thought you were just putting blueberries and red peppers in a bowl…

Featured Contributor Melanie Potock,  MA, CCC-SLP
About the Author:  Melanie is speech language pathologist who specializes in feeding.  Her work brings her into the homes and schools of her clients, kids, who for various reasons have difficulty with food or with eating. She works with kids and their parents to develop effective strategies that help children become “more adventurous eaters”.  At least 50% of her clients have food allergies or intolerances, and for them, “adventurous eating” takes on a special meaning.  Melanie is also the author of Happy Mealtimes with Happy Kids” and the executive producer of “Dancing in the Kitchen.”