SLP Corner: I’ll have a Sausage and People Pizza: The Controversy over Auditory Processing Disorder 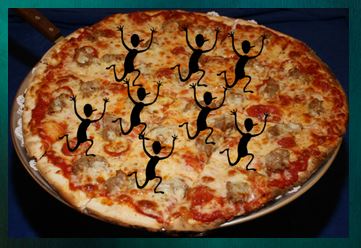 This post is hopefully the start of an open dialog among colleagues about Auditory Processing Disorders.  I have had this post in draft mode for some time and it’s almost the start of a larger post but due to the recent discussion on twitter about Auditory Processing Disorders I thought I would post this. ( I am by no means an expert in the matter and this  post is merely to get people thinking.)
I recently became aware of the controversy over Auditory Processing Disorder. Are you aware of this controversy? It’s apparently very similar to the argument against non-speech oral motor exercises. There are basically two camps on this topic- audiologists/slps that believe that this is a true disorder and SLP’s that insist that APDs simply do not exist and it really all involves a weakness in the individual’s language skills.
This past November at the ASHA convention I sat through two very different talks about Auditory Processing Disorders. The first talk was titled A Speech Pathologist’s Guide for Interpreting the Auditory Processing Evaluation and was given by Velvet Buehler who is a  dual certified Audiologist and Speech-Language Pathologist. She who discussed  how to properly interpret an auditory processing evaluation as well as what the course of treatment looked like. After this talk I felt good that what I was currently doing as far  as assessment and treatment was on par with what this speaker was presenting.  However I then walked into a talk titled What Speech-Language Pathologists Need to Know About Auditory Processing Disorders. The presenters for this session were Alan Kamhi and Geraldine Wallach.  Their stance on APD is essentially that it doesn’t exist and cite their research with the following quote:

“Because there is no evidence that auditory interventions provide any unique therapeutic benefit (Fey et al., 2011), clinicians should treat children who have been diagnosed with APD the same way they treat children who have been diagnosed with language and learning disabilities. The theoretical and clinical problems associated with APD should encourage clinicians to consider viewing auditory deficits as a processing deficit that may occur with common developmental language and reading disabilities rather than as a distinct clinical entity.”

They started their talk off with some real life examples that really made sense at the time. One of the examples was about a woman who who was in a German bar. She was learning the German language and could partake in general conversation however in the bar it was very loud and she was having a very difficult time understanding the other people speaking in German to her. She asked if they spoke English which they did and as they spoke to each other in English she found that she was able to now understand everything that she heard. So what was the difference here? Well the difference was that she had a weak foundation in German and had trouble filling in the parts that she had missed due to the loud environment  This makes lots of sense right? If she was weak in the language she was learning then she couldn’t keep up with the conversation as quickly as she would with her native language of English.  This whole example really started to make me question the earlier session that I had sat through. Was APD really based on some shotty research and questionable auditory intervention techniques?
A few weeks later I was at a  pizza place with a group of friends. This was a Friday night so it was busy and very noisy inside. A friend of mine was in line ordering the pizza for us. We ordered Sausage and Meatball pizza however the cashier taking the order was standing in the kitchen and was having difficulty hearing the order. She asked him to repeat himself a few times and finally questioned his order with “You want a sausage and people pizza?”  Yes you read that right, she asked if he had ordered a pizza with both sausage as well as people on it. Last time I checked  Soylent Green was against the law (Insert funny Charleston Heston joke here —>) So what happened here ? You would think a grown women would have at least the language skills to complete the auditory closure task of I’ll have a  sausage and ________ pizza, right? or does she really have some auditory processing deficits and instead heard people.
I’ll end with this blurb from a study that McArthur and Bishop conducted hinting at the fact that there are components of both language and auditory processing deficits in play.

“McArthur and Bishop (2004b) also found that a subgroup of children with specific language disorder showed difficulty on auditory discrimination (consistent with the view of APD as an impaired skill) and poor reading. Another subset of children inMcArthur and Bishop ’ s study had poor sustained auditory attention and/or auditory memory as well as APD.”

What are your thoughts??
Please support our contributors, visit and subscribe to the Speech Guy blog!