Editor’s Note:   We are very sad to hear of Koko’s passing.  She taught us so very much about language, learning, grief — and love.  Did YOU learn about her in SLP Grad School?? 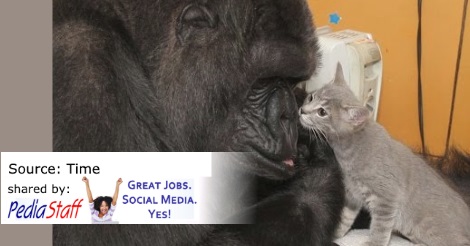 Koko the gorilla earned her pronouns a long, long time ago. It is one of humanity’s great vanities that we withhold pronouns from most animals — or at least we withhold the good ones. Homo sapiens get the dignity of a “he” or a “she.” We fob off other species with an “it.” We speak of the woman who walked down the street, and the dog that accompanied her.

It was never that way with Koko, the celebrated western lowland gorilla who died peacefully in her sleep on June 19, at age 46 — a bit longer than the 30 to 40 years her species typically lives in the wild. From the time she was born, on July 4, 1971, the people who knew Koko and cared for her made sure she was a she. And when the rest of us spoke about her in the years that followed, the very nature of the things we said demanded that we show her the same

Read the Rest of this Article on Time Magazine