So Many Ways to Modify Candyland for Speech and OT! 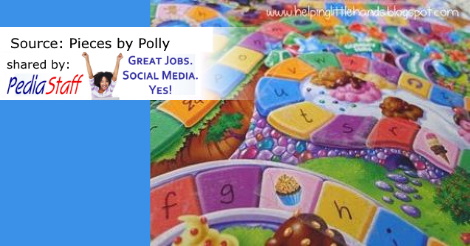 This is the second modified version of Candyland we have seen since joining Pinterest, but this one seems even more popular than the first.  We started brainstorming over here and realize that it is the sheer flexibility of this game that makes it so perfect for speech and occupational therapy!

Polly modified this classic game by writing lower case letters in alphabetical order throughout the game board path.    During play, the child says the sound the letter makes when they land on it.

There are so many ways you can further modify this game like the ‘Sight Words Edition’ that we’ve seen previously on Pinterest.    But thinking like a Speechie, I was thinking you could do specific speech sounds for articulation.   In fact, you could have several versions of the game for different children.  Instead of using tape on the game board pieces you could use clear contact paper squares with different speech sounds on each square.  You could remove the stickies and store them on wax paper.    It would take some time to set it up but then you wouldn’t have to have several versions of the game.

Another idea if you want to have more than one version of the game is not to put the letters on the board itself, at all, instead have a color coded key, where each color could represent a different speech sound that you are working on or be a cue for the child to read a vocabulary word with that sound.

Thinking like an OT, you could also use the game for ’emotions’ practice.   There are seven colors and each color could represent one emotion and the child needs to choose a picture of that emotion from a card deck or make a face to show that emotion.

Who has other ideas for both Speech and OT use???