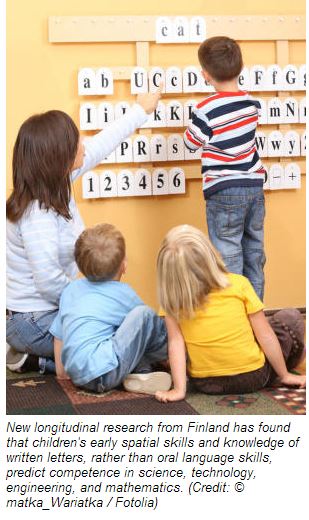 Early math skills are emerging as important to later academic achievement. As many countries seek to strengthen their workforces in the STEM (science, technology, engineering, and mathematics) fields, understanding the early contributions to math skills becomes increasingly vital. New longitudinal research from Finland has found that children’s early spatial skills and knowledge of written letters, rather than oral language skills, predict competence in this area.
The research also found that children’s ability to count sequences of numbers serve as a bridge: Children with stronger early spatial skills and knowledge of written letters did better in counting sequences of numbers; such skill in counting was related to later math competence in general.
Published in the journal Child Development, the study was conducted by researchers at The Hong Kong Institute of Education, and the Niilo Mäki Institute and the University of Jyväskylä, both in Finland.
Read the Rest of this Article on Science Daily