Study Sheds Surprising Light on the Causes of Cerebral Palsy 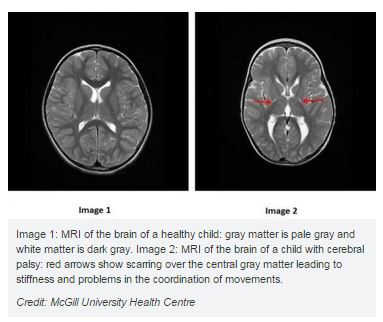 Cerebral palsy (CP) is the most common cause of physical disability in children. It has historically been considered to be caused by factors such as birth asphyxia, stroke and infections in the developing brain of babies. In a new game-changing Canadian study, a research team from The Hospital for Sick Children (SickKids) and the Research Institute of the McGill University Health Centre (RI-MUHC) has uncovered strong evidence for genetic causes of cerebral palsy that turns experts’ understanding of the condition on its head.

The study, published online August 3 in Nature Communications could have major implications on the future of counselling, prevention and treatment of children with cerebral palsy.
“Our research suggests that there is a much stronger genetic component to cerebral palsy than previously suspected,” says the lead study author Dr. Maryam Oskoui, Paediatric neurologist at The Montreal Children’s Hospital (MCH) of the MUHC, co-director of the Canadian Cerebral Palsy Registry and an Assistant Professor in the Department of Paediatrics and Department of Neurology and Neurosurgery at McGill University. “How these genetic factors interplay with other established risk factors remains to be fully understood. For example, two newborns exposed to the same environmental stressors will often have very different outcomes. Our research suggests that our genes impart resilience, or conversely a susceptibility to injury.”
Read the Rest of this Article on Science Daily