The ABCs of Animal Speech: Not so Random After All 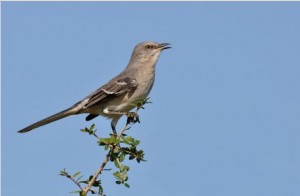 The calls of many animals, from whales to wolves, might contain more language-like structure than previously thought, according to study that raises new questions about the evolutionary origins of human language.

The study, published in the journal Proceedings of the Royal Society B, analyzed the vocal sequences of seven different species of birds and mammals and found that the vocal sequences produced by the animals appear to be generated by complex statistical processes, more akin to human language.

Many species of animals produce complex vocalizations — consider the mockingbird, for example, which can mimic over 100 distinct song types of different species, or the rock hyrax, whose long string of wails, chucks and snorts signify male territory. But while the vocalizations suggest language-like characteristics, scientists have found it difficult to define and identify the complexity.
Typically, scientists have assumed that the sequence of animal calls is generated by a simple random process, called a “Markov process.” Using the Markov process to examine animal vocalization means that the sequence of variables — in this case, the vocal elements — is dependent only on a finite number of preceding vocal elements, making the process fairly random and far different from the complexity inherent in human language.
Read the Rest of this Article on Science Daily