Universal Syllables: Some Innate Preferences Shape the Sound of Words at Birth 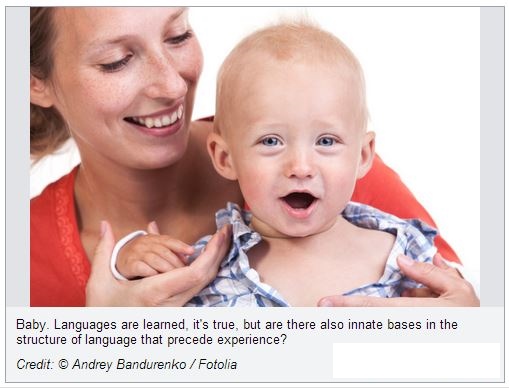 Languages are learned, it’s true, but are there also innate bases in the structure of language that precede experience? Linguists have noticed that, despite the huge variability of human languages, there are some preferences in the sound of words that can be found across languages.  So they wonder whether this reflects the existence of a universal, innate biological basis of language. A new study provides evidence to support to this hypothesis, demonstrating that certain preferences in the sound of words are already active in newborn infants.
Take the sound “bl”: how many words starting with that sound can you think of? Blouse, blue, bland… Now try with “lb”: how many can you find? None in English and Italian, and even in other languages such words either don’t exist or are extremely rare. Human languages offer several examples of this kind, and this indicates that in forming words we tend to prefer certain sound combinations to others, irrespective of which language we speak. The fact that this occurs across languages has prompted linguists to hypothesize the existence of biological bases of language (inborn and universal) which precede language learning in humans. Finding evidence to support this hypothesis is, however, far from easy and the debate between the proponents of this view and those who believe that language is merely the result of learning is still open. But proof supporting the “universalist” hypothesis has now been provided by a new study conducted by a research team of the International School for Advanced Studies (SISSA) in Trieste and just published in the journal PNAS.
Read the Rest of this Article on Science Daily