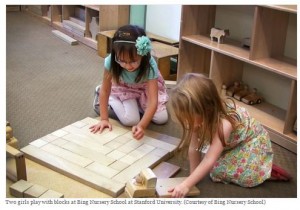 Our “Tools of the Trade” series is taking a look at some of the iconic objects that form a vital part of our educational lives. For an upcoming piece, I’m reporting on how young children learn through that most basic of preschool education tools: simple wooden blocks.

Dr. Dimitri Christakis has done done extensive research on blocks and play and lectured on media and children. He is the Director of the Center for Child Health, Behavior and Development at Seattle Children’s Research Institute. He’s also a pediatrician at Seattle Children’s Hospital and a professor of pediatrics at the University of Washington School of Medicine.

And so we talked about the way young children learn and how their minds develop. He’s not against digital education tools. But he says they have to be the right kind and age-appropriate. He is raising alarms that Americans are over-charging their infant’s developing brains.

In a broad sense your research seems to point to the fact that over-stimulation in children’s brain is having a negative effect when it comes to fast paced media. Is that accurate?

Right. Our brains evolved over millennia to process things that happen in real time. And by definition, anything that happens in the real world happens in real time. It wasn’t really until the advent of modern media that we were able to speed things up and make them happen at a pace that is surreal. And even early media didn’t do that. That’s a relatively new phenomenon. In the case of infants there was no infant television viewing prior to about 10 years ago. And we’ve seen an explosion since then. Today, 90 percent of children watch TV on a regular basis before the age of 2. In spite of the fact that the American Academy of Pediatrics advises strongly against that.

Read the Rest of this Article on Mind Shift