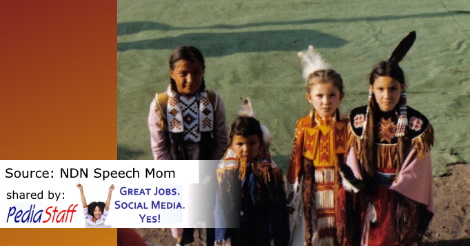 By: Skye Blue Angus’  copyright 2010. Skye Blue Angus.
This blog post has been reprinted with express permission of the author as it appeared on her blog Cree-zy, Crazy Speechie

Indigenous peoples are traditionally storytellers. Oral traditions are historical accounts, teachings, lessons and explanations that have been passed down for centuries, from one generation to the next. Indigenous peoples have existed historically as an oral language people. However, Native oral tradition is difficult to write about academically, appropriately or accurately. Traditionally, it is taboo in Native culture to write down oral traditions. Finding accurate unbiased literature about Native culture, particularly Native oral tradition, is difficult at best because it has not been written down. The true body of information on oral tradition is in the heads and on the lips of Natives.

The culture of the Indigenous peoples of North America is rich in history and traditions. Many of these practices have been passed down for centuries, although at certain periods they were not practiced. Oral tradition has kept native cultural traditions alive, when dominant society tried to eradicate the culture with assimilation.  Can you find young Ndnspeechmom?
For example, Indian Residential Schools in Canada were run either by the Anglican or

Catholic Churches and utilized various practices to educate and “help” native children fit into western society. Residential schools separated children from their families and made it impossible for them to hear stories about the old ways and to observe and learn how to do traditional things. Residential Schools employed forced attendance and tried to erode native culture and assimilate native children into the dominant Anglo-European culture. Students at these schools were severely punished for speaking their native language, having braids, wearing native clothes and for participating in anything deemed “Indian”. Many native people think that missionaries only made these schools to “take their children away” and to break their culture.

Traditionally, there was no need for the written word; therefore, within Native culture, oral traditions are more important than the written word. Many native cultures have no written histories and some native languages have no written forms. In general, written versions of oral traditions are often not accurate and often not credited to the source. This is because research and writing about native people is dominated by non-natives. Currently, as in the past, some traditional Native people do not write down their stories because they have been taught that stories should be spoken aloud and not read. From a traditional viewpoint, to write down a story degrades it, cheapens it and lessens it.

Natives are very different from the rest of western society. They are taught as children to be active listeners as opposed to being taught to actively participate in discussions. Traditionally Native children are taught to observe and understand a situation before actively participating and that listening is more important than questioning. Most traditional teachings are passed on to children by having them watch and listen. Researchers have found that the learning styles of Natives show strengths in holistic processing, visual memory and visual-spatial activities. Clearly, native traditional childrearing practices have stimulated the development of certain skills, notably those of observation and imitation. 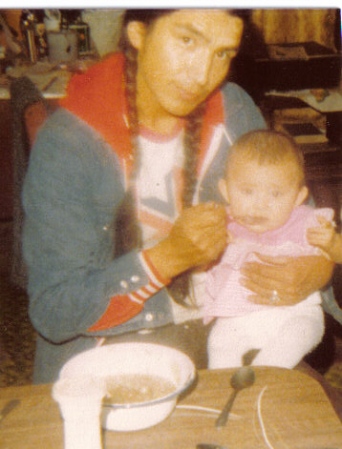 Guess what dad is feeding me…
Indigenous peoples are active listeners. Often, they know or think things but do not say them. There is an idea that it is impossible to listen with an open mouth. Native peoples learn and think differently from the current dominant society, but do not see themselves as inferior. Europeans brought with them methods of memorization and categorization to measure intelligence, excellence and education, however, these methods were alien to natives. The teachings that have survived centuries and been the backbone to innumerable cultures are simply not valued in western society.

Native peoples suffer barriers to success in western society. They are separate from other ethnic groups in regards to history, culture and image. There is a definite lack of communication between Native’s and the dominant populations of the Americas. Communication between these groups is necessary because the attitudes of Native people are deep seeded and historical and, therefore, need to be acknowledged and respected. Many Native values are not shared by western society and conversely some Native’s do not appreciate the values of mainstream middle class society. Generally to achieve “success” native people are forced to adapt to the dominant society, while striving to maintain their cultural heritage. The value placed on oral traditions is one of the things that has survived in native culture.

An individual who is going to be working with this population needs to be open minded and willing to learn about a culture that may be very different from his/her own. Traditional beliefs color all aspects of native life, and include great respect for family, community, tribal ways and the individual. A Speech Pathologist who is open and nonthreatening would be a great asset in the Native community. Native peoples do not expect non-natives to know the details of their culture and are willing to provide information, but only if the person seeking the knowledge does so in the proper way. Knowledge is the greatest gift a Native has to give; therefore, the telling of oral traditions involves trust and mutual respect. The storyteller needs to trust the listener to take away the proper message and should respect them for listening to their story. The listener must respect the storyteller and not interrupt with questions that may be interpreted as impertinent or questioning.

The most important thing to remember when working with Native peoples is respect. Respect our traditions and teachings, they may not be the ways of western society but they are the native way. These traditions have survived generations and deserve respect; understanding is not required.

Featured Author: Skye Blue Angus, SLP
Many thanks to Skye Blue Angus for this Guest Blog.
Fun, family and speech therapy a go-go! Maybe I am not your “typical” SLP….I am however extremely motivated and love my job, so maybe I am typical after all! No Susie’s here though, and if you are a Susie (or know what that means) you have just won a cookie. Congratulations!  My twitter handle @ndnspeechmom describes me perfectly…
NDN – This is a slang term for the (politically incorrect) word Indian; meaning First Nations (Native American). I was born and raised on a reservation and am a proud member of the Plains Cree nation.
SPEECH – I am an (overly) enthusiastic Speech Pathologist. I received my master’s degree while I was going to graduate school in North Carolina. I miss the Southern weather whenever winter rolls around here in Saskatchewan.
MOM – I am a proud mommy to 3 little ndn tacos (my babies are half Mexican)
Ok, maybe it doesn’t decribe me fully so I will try fill in a few more blanks. I am married to a wonderful man who willingly came to live in snowy Canada. (His hometown is Acapulco–seriously I think he is crazy to leave such a beautiful place.) My addictions include M.A.C. makeup, LUSH, television series on DVD and laughing too loudly in public.