Worth Repeating: Reaching My Son With Autism Through Disney 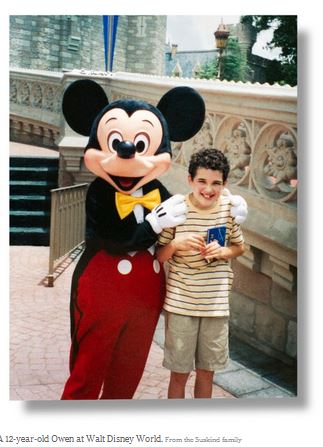 In our first year in Washington, our son disappeared.

Just shy of his 3rd birthday, an engaged, chatty child, full of typical speech — “I love you,” “Where are my Ninja Turtles?” “Let’s get ice cream!” — fell silent. He cried, inconsolably. Didn’t sleep. Wouldn’t make eye contact. His only word was “juice.”

I had just started a job as The Wall Street Journal’s national affairs reporter. My wife, Cornelia, a former journalist, was home with him — a new story every day, a new horror. He could barely use a sippy cup, though he’d long ago graduated to a big-boy cup. He wove about like someone walking with his eyes shut. “It doesn’t make sense,” I’d say at night. “You don’t grow backward.” Had he been injured somehow when he was out of our sight, banged his head, swallowed something poisonous? It was like searching for clues to a kidnapping.

After visits to several doctors, we first heard the word “autism.” Later, it would be fine-tuned to “regressive autism,” now affecting roughly a third of children with the disorder. Unlike the kids born with it, this group seems typical until somewhere between 18 and 36 months — then they vanish. Some never get their speech back. Families stop watching those early videos, their child waving to the camera. Too painful. That child’s gone.

Read the Rest of this Article on the New York Times.com