Editor’s Note: This seems exactly the opposite of another study we featured a few weeks ago.  Go figure. 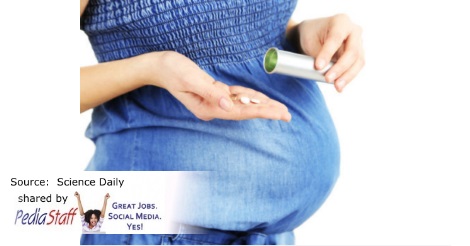 An analysis of medical records data from three Massachusetts health care systems finds no evidence that prenatal exposure to antidepressants increases the risk for autism and related disorders or for attention-deficit hyperactivity disorder (ADHD). In their report being published online in Translational Psychiatry, the Massachusetts General Hospital (MGH)-based research team finds evidence that any increased incidence of autism or ADHD found in previous studies was probably associated with the severity of the mother’s depression — a known risk factor for several neuropsychiatric disorders — and not from antidepressant exposure during pregnancy.
“The fact that we now have found, in two large case-control studies, no increase in the risk for autism with antidepressant use itself should be very reassuring,” says Roy Perlis, MD, MSc, MGH Department of Psychiatry, senior author of the current report and of an earlier study published in 2014. “Some of the studies that have suggested an association did not account for key differences between mothers who take antidepressants and those who don’t, in particular that those taking antidepressants are more likely to have more severe illness.”
Read the Rest of this Article on Science Daily