New Findings on How the Brain Ignores Distractions 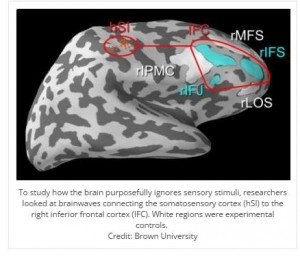 When we concentrate on something, we also engage in the unsung, parallel act of purposefully ignoring other things. A new study describes how the brain may achieve such “optimal inattention.” With this knowledge, scientists at Brown University hope they can harness our power to ignore — for instance, to reduce pain.

“This is about the mechanisms the brain is using to block out distracting things in the environment,” said Stephanie Jones, assistant professor (research) of neuroscience at Brown and corresponding author of the study.

Ignore the hand, attend the foot

The new findings, published in the Journal of Neuroscience, arise from brain scans of 12 volunteers, who during experiments were told they would feel a brief tap on the left middle finger or the left big toe. In some cases they were then told to report only stimuli felt on the foot and to disregard what they might feel on their hand. In other cases they were told to attend to or report sensations only in the hand and to ignore those in the foot.