18 November 2011, Down Syndrome, News of the Week, Newsletter
Heidi Kay 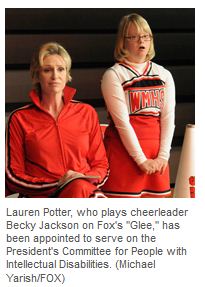 [Source: Disability Scoop]
President Barack Obama is soliciting advice on disability issues from an actress with Down syndrome who has a regular role on Fox’s “Glee.”

Lauren Potter, who plays cheerleader Becky Jackson on Fox’s “Glee,” has been appointed to serve on the President’s Committee for People with Intellectual Disabilities.

Obama said he plans to appoint Lauren Potter, 21, to the President’s Committee for People with Intellectual Disabilities. She is well-known for playing cheerleader Becky Jackson on the hit television show “Glee.”
The committee Potter will join is made up of 21 citizens and 13 federal representatives who are tasked with advising the president and the secretary of health and human services on issues pertaining to Americans with intellectual disabilities.
Read the Rest of this Article on Disability Scoop