Antioxidant in Broccoli 'Shows Promise' as Treatment for Progeria 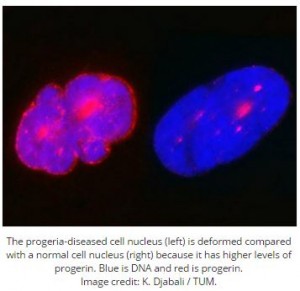 A new study finds that the nuclei of cells in children affected by the extremely rare disease progeria are poor at breaking down and disposing of defective proteins. It also finds that an antioxidant present in broccoli appears to give the protein-clearing system a boost, potentially reducing the effects of the disease.

Progeria – short for Hutchinson-Gilford progeria syndrome – is an extremely rare and fatal genetic disorder where children appear to age prematurely because of a faulty protein in their cell nuclei. As the defective protein – known as progerin – accumulates, it interferes with a number of cell functions.

In the journal Aging Cell, researchers from the Technical University at Munich (TUM) in Germany, describe how they succeeded in reducing levels of progerin in diseased cells by reactivating a protein-clearing process. They did this using sulforaphane – an antioxidant found in broccoli and other cruciferous vegetables, such as cabbage and Brussels sprouts.

For their study, the team – led by Karima Djabali, a professor in the TUM School of Medicine and the Institute for Medical Engineering – compared progeria-diseased cells with healthy cells to look for differences in the proteins in the cell nuclei.