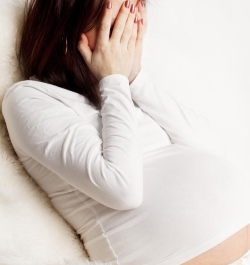 Depression is a serious mental illness that has many negative consequences for sufferers. But depression among pregnant women may also have an impact on their developing babies.Children of depressed parents are at an increased risk of developing depression themselves, a combination of both genetic and environmental factors. These children also display alterations in the amygdala, a brain structure important for the regulation of emotion and stress. However, prior work in this area has assessed children years after birth, which means that the timing of these alterations has remained unidentified.

Researchers led by Dr. Anqi Qiu at the National University of Singapore now have the answers, with their new work published in the current issue of Biological Psychiatry.
They set out to perform a direct analysis of prenatal maternal depression and variation in the fetal development of the amygdala. To do so, they recruited 157 pregnant women who completed a depression questionnaire during their 26th week of pregnancy. Later, within two weeks of birth, newborns underwent magnetic resonance imaging scans to ascertain the structure of their amygdala and diffusion tensor imaging scans to determine the integrity of the amygdala’s pattern of neural connections.
Read the Rest of this Article on Science Daily