Doctors Train to Spot Signs of ADHD in Children 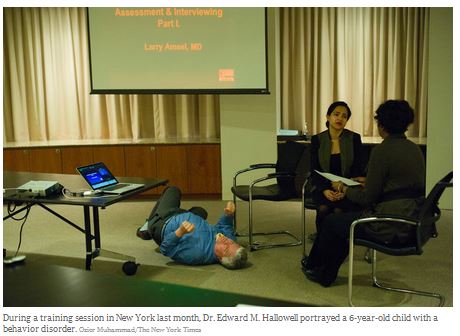 Jerry, 9 years old, dissolved into his Game Boy while his father described his attentional difficulties to the family pediatrician. The child began flitting around the room distractedly, ignoring the doctor’s questions and squirming in his chair — but then he leapt up and yelled: “Freeze! What do you think is the problem here?”

Nine-year-old Jerry was in fact being played by Dr. Peter Jensen, one of the nation’s most prominent child psychiatrists. On this Sunday in January in New York, Dr. Jensen was on a cross-country tour, teaching pediatricians and other medical providers how to properly evaluate children’s mental health issues — especially attention deficit hyperactivity disorder, which some doctors diagnose despite having little professional training.One in seven children in the United States — and almost 20 percent of all boys — receives a diagnosis of A.D.H.D. by the time they turn 18, according to the Centers for Disease Control and Prevention. It narrowly trails asthma as the most common long-term medical condition in children.

Increasing concern about the handling of the disorder has raised questions about the training doctors receive before diagnosing the condition and prescribing stimulants like Adderall or Concerta, sometimes with little understanding of the risks. The medications can cause sleep problems, loss of appetite and, in rare cases, delusions.

Read the Rest of this Article on NYTimes.com