Learning to Play the Piano? Sleep on It! 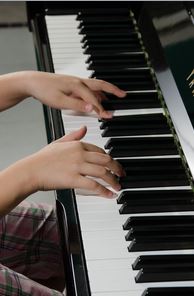 According to researchers at the University of Montreal, the regions of the brain below the cortex play an important role as we train our bodies’ movements and, critically, they interact more effectively after a night of sleep. While researchers knew that sleep helped us the learn sequences of movements (motor learning), it was not known why.

“The subcortical regions are important in information consolidation, especially information linked to a motor memory trace. When consolidation level is measured after a period of sleep, the brain network of these areas functions with greater synchrony, that is, we observe that communication between the various regions of this network is better optimized. The opposite is true when there has been no period of sleep,” said Karen Debas, neuropsychologist at the University of Montreal and leader author of the study. A network refers to multiple brain areas that are activated simultaneously.
To achieve these results, the researchers, led by Dr. Julien Doyon, Scientific Director of the Functional Neuroimaging Unit of the Institut universitaire de gériatrie de Montréal Research Centre, taught a group of subjects a new sequence of piano-type finger movements on a box. The brains of the subjects were observed using functional magnetic resonance imaging during their performance of the task before and after a period of sleep. Meanwhile, the same test was performed by a control group at the beginning and end of
Read the Rest of this Article on Science Daily