[Source: Medical World Today]
Babies born prematurely face an increased risk of neurological and psychiatric problems that may be due to weakened connections in brain networks linked to attention, communication and the processing of emotions, new research shows. 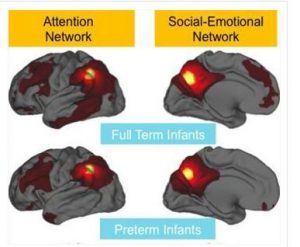 A comparison of brain scans from babies born at full term and at least 10 weeks prematurely shows differences in the activity of brain networks. The red and yellow areas represent coordinated activity. In preemies, the red areas are smaller due to less coordinated activity between these regions.
Credit: Washington University School of Medicine

Studying brain scans from premature and full-term babies, researchers at Washington University School of Medicine in St. Louis zeroed in on differences in the brain that may underlie such problems.
“The brain is particularly ‘plastic’ very early in life and potentially could be modified by early intervention,” said principal investigator Cynthia Rogers, MD, assistant professor of child psychiatry. “We usually can’t begin interventions until after symptoms develop, but what we’re trying to do is develop objective measures of brain development in preemies that can indicate whether a child is likely to have later problems so that we can then intervene with extra support and therapy early on to try to improve outcomes.”
Read the Rest of this Article on Medical News Today