Parent's Corner: What Our Occupational Therapists Have Done Right: A Parent’s Perspective 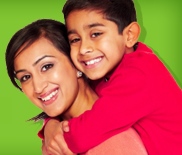 Our son was diagnosed at the age of two with PDD-NOS, and later with Asperger’s Syndrome. At about two and a half, he started school with a special educator, speech and occupational therapy. I had never even heard the term “occupational therapy” and at first, I’ll admit, I couldn’t figure out what job skills could possibly be taught to a two year old. I’ve gotten quite an education from the five OTs who have worked with him, not to mention the one who is now consulting with my daughter’s teachers to address her fine motor challenges. While some of the OTs have been more effective than others, there have been some traits that have made our joint effort as successful as possible.
The biggest thing that has benefited our family has been open communication, with us and with the rest of the team. It seems like it should go without saying, but we’ve had situations where teachers or therapists have not been very forthcoming with us and with each other. It makes a big difference. When our therapists have let us know what they are working on, with my son in particular, it allows us to follow through at home in order to provide reinforcement and consistency. We can also give the therapist feedback on whether or not a particular method is working, whether the skill being taught is generalizing outside of the OT room. Just recently in the classroom, my son’s teacher and OT worked together to create a system for him to request whatever sensory stimulation he needs in order to focus. He has done very well this year with being able to get work done independently as a result.
Another big help has been when therapists are willing to “think out of the box.” I’ve seen some people get very stuck on a method or intervention that they think should work based on results that they’ve gotten with other students. At one point, my son was being given any-and-every kind of weighted item they could find in the classroom, but couldn’t understand why they only worked a small percentage of the time. The following year, his OT (he had a new teacher and this is another time that communication helped) found a body sock for him, which worked much better. Now that they know he looks for a full-body squeeze (and not weight), he gets time in a giant bean-bag, and the orientation of his desk has been changed so that he’s sort of wedged between the desk and the wall, a much more secure position for him.
This leads to a final point: accepting when something isn’t working and making necessary adjustments instead of trying to force a child into doing something. At one point, my son’s current OT was having limited success in helping him with handwriting. Instead of beating a dead horse, she facilitated getting him Physical Therapy services to strengthen his core. He can now focus with her on handwriting instead of constant postural correction, because he was just too weak to sit up for long.
Overall, a true team attitude coupled with a flexible mindset has been the way in which we’ve seen the most progress with our son and his occupational therapists. He’s accomplished things, like riding a two-wheeler and tying his own shoes, that initially we were led to believe he might never be able to do. For the most part, his OTs have been instrumental in his progress, and we are grateful for the continued support.
This Month’s Featured Author:  Andrea S.
We thank Andrea for providing us with this article from a parent’s perspective.
Andrea S. (last name omitted to protect her family’s privacy) is a writer, yoga teacher, English tutor and mother of two: an 8-year-old son, who has a diagnosis of Asperger’s, and a 6-year-old daughter. In the six years since her son was first diagnosed, Andrea has learned a great deal about the autism spectrum, and two years ago started blogging about her journey as the mother of an Aspie child.
Please visit Andrea’s Blog My Autism Insights