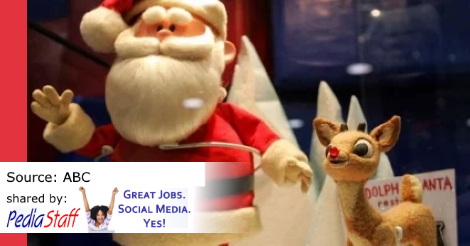 Editor’s Note:  It is important to note that this article refers to the original 1964 cartoon story.   Political correctness gone too far or real food for thought?   You decide.    Perhaps we could use the song and movie as an opportunity for a teachable moment about bullying prevention!

Most people think of “Rudolph the Red-Nosed Reindeer” as a cute little story about a cute little reindeer with a cute shiny nose and a happy ending.

Think again, says George Giuliani, a special ed professor at Long Island University in New York, who has written an alternative to the Christmas classic called “No More Bullies at the North Pole.”

He recently went on “Fox & Friends” to discuss the issue and says the treatment Rudolph receives from jolly St. Nick and his merry band of reindeer is tantamount to bullying.

For example, when Comet, the team coach, discovers Rudolph’s nose glows, he banishes him from the team and tells the other reindeer to never let him join in any reindeer games.

“What a terrible message to send to children,” Giuliani told ABCNews.com.

Santa is no better. He chastises Donner, Rudolph’s father, for having a red-nosed offspring and enforces policies at the North Pole that keep Hermey toiling away as an elf instead of allowing him to be the dentist he dreams of being.

“The whole community of the North Pole is into exclusion, not inclusion. You even have an island of misfit toys. The word ‘misfit’ is used 27 times,” pointed out Giuliani, who admits he’s never been a fan of the Rudolph story ever since hearing the Christmas carol at age 14 and thinking, “What an awful song this is.”

Read the Rest of This Article on ABC News.com