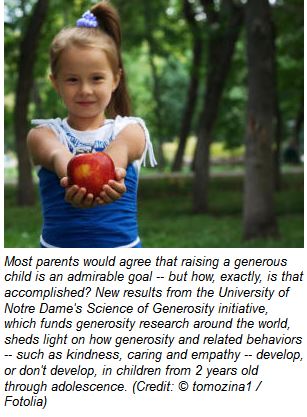 Most parents would agree that raising a generous child is an admirable goal — but how, exactly, is that accomplished? New results from the University of Notre Dame’s Science of Generosity initiative, which funds generosity research around the world, shed light on how generosity and related behaviors — such as kindness, caring and empathy — develop, or don’t develop, in children from 2 years old through adolescence.
As part of Notre Dame’s Science of Generosity-funded research, psychology professor Ariel Knafo of Hebrew University focused on the complex interactions between genetics and socialization practices, more commonly known as the “nature v. nurture” question. Knafo’s study, published in PLoS ONE, showed a significant link between a particular gene variation and less altruistic behavior in preschoolers. Those with a genetic variation known as the AVPR1A RS3 327 bp allele exhibited lower allocations in dictator game experiments, in which the first player (the “proposer”) determines the split of an endowment, such as a cash prize. The second player (the “responder”), who has no strategic input into the outcome of the game, passively receives the remainder of the endowment left by the proposer.
Read the Rest of this Article on Science Daily.com