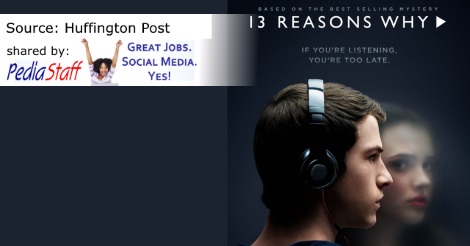 by Andrew Livanis, President of the New York Association of School Psychologists

Because the series shines a spotlight on the mental health issues that our children face on a daily basis. According to the New York Association of School Psychologists:

• 20% of children are diagnosed with a mental health disorder severe enough to interfere with their daily life functioning.

• 75%-80% of those children do not receive the appropriate mental health services to address these problems.

• Mental health problems impact a child’s ability to function in school, including academic achievement, performance on standardized testing, and social interactions with others.

The series also tackles other very important and related issues such as date rape and of course, suicide. According to TeenHelp.com roughly 44% of rape victims are below the age of 18 and almost 92% of all teen rape victims know their attackers. The Centers for Disease Control states that suicide is the third leading cause of death for teens, and that roughly 16% of teens reported seriously considering suicide.

2. …Because – and let’s not fool ourselves – every school has a bullying problem. School only vary in terms of how bad the problem is and what the school community does about it. According to the National Association of School Psychologists, bullying refers to a relationship where one person repeatedly acts negatively towards another. Bullies intentionally harm their victims because they often hold an official or unofficial position of power over their victims. Bullies often feel positively after their actions, while victims are left hurt, saddened, angry, or, all too often empty inside.

Read the Rest of this Article on Huffington Post