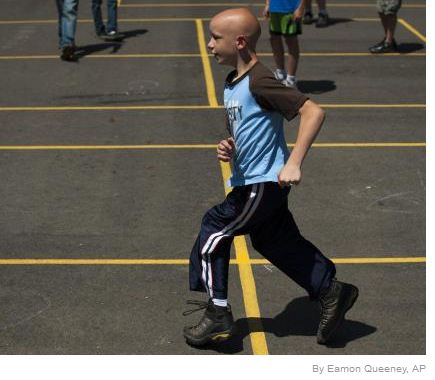 When John Blaine realized 11-year-old Matt Woodrum was struggling through his 400-meter race at school in central Ohio, the physical education teacher felt compelled to walk over and check on the boy.
“Matt, you’re not going to stop, are you?” he encouragingly asked Woodrum, who has cerebral palsy.
“No way,” said the panting, yet determined, fifth-grader.
Almost spontaneously, dozens of Woodrum’s classmates — many who had participated earlier in the school’s field day — converged alongside him, running and cheering on Woodrum as he completed his final lap under the hot sun.
The race on May 16, captured on video by Woodrum’s mother, is now capturing the attention of strangers on the Internet, many who call the boy and his classmates an inspiration to be more compassionate toward each other. A nearly five-minute YouTube video posted this week by the boy’s uncle has received more than 680,000 views.