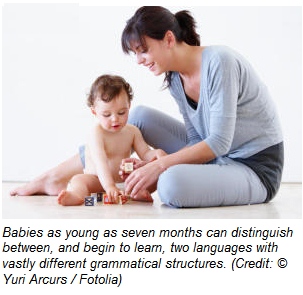 Babies as young as seven months can distinguish between, and begin to learn, two languages with vastly different grammatical structures, according to new research from the University of British Columbia and Université Paris Descartes.
Published February 14 in the journal Nature Communications and presented at the 2013 Annual Meeting of the American Association for the Advancement of Science (AAAS) in Boston, the study shows that infants in bilingual environments use pitch and duration cues to discriminate between languages — such as English and Japanese — with opposite word orders.
In English, a function word comes before a content word (the dog, his hat, with friends, for example) and the duration of the content word is longer, while in Japanese or Hindi, the order is reversed, and the pitch of the content word higher.
Read the Rest of this Article on Science Daily.com