Books for Picky Eaters from the New York Times 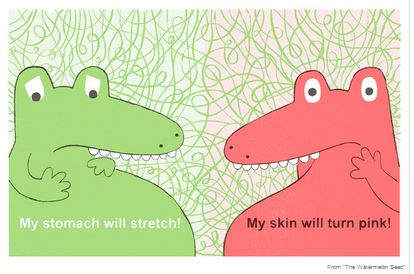 Children often have a baffling relationship with food. One child is terrified of cheese; another will eat nothing but. One 4-year-old’s beloved slice of watermelon tastes like soap to his 7-year-old sister. Two new picture books celebrate the love, the dislike and the occasional fear inspired by two of (most) children’s favorite foods: watermelon and lollipops.

“The Watermelon Seed,” by Greg Pizzoli, has a juicy premise posed as a question: “Have you ever swallowed a seed?” The fear of swallowing something you’re not supposed to has a rich tradition in children’s song and literature (flies, bubblegum) and in real life. Most children at one point or another accidentally down an appleseed (poison!) or a cherry pit (“You’ll choke!”). In this book, a curiously small crocodile and lifelong watermelon fan, not surprisingly, eventually swallows a seed. Gulp.

Read the Rest of this Dual Book Review on the New York Times.com