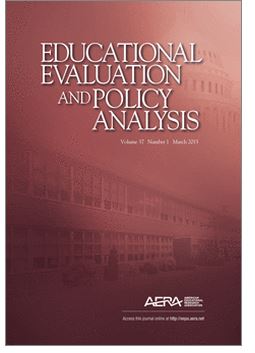 Access to state-supported early childhood programs significantly reduces the likelihood that children will be placed in special education in the third grade, academically benefiting students and resulting in considerable cost savings to school districts, according to new research published today in Educational Evaluation and Policy Analysis, a peer-reviewed journal of the American Educational Research Association.

The findings suggest that the programs provide direct benefits not only to participating students but also to other third graders through positive spillover effects.
The study, by Clara G. Muschkin, Helen F. Ladd, and Kenneth A. Dodge at Duke University’s Sanford School of Public Policy, examined how investments in two high-quality early childhood initiatives in North Carolina — a preschool program for four-year-olds from at-risk families and a program that provides child, family, and health services for children from birth through age five — affected the likelihood that children would be placed in special education by the end of third grade from 1995 to 2010.
The authors found that an investment of $1,110 per child in the More at Four preschool program (now called NC Pre-K) — the funding level in 2009 — reduced the likelihood of third-grade special education placements by 32 percent. An investment of the same amount in the Smart Start early childhood initiative reduced the likelihood by 10 percent. Both programs together reduced third grade students’ odds of special education placement by 39 percent, resulting in significant cost savings for the state. Nationwide, special education costs nearly twice as much as regular classroom education.
“These major investments in childhood programs have been important not only to the future of students but to the state’s financial bottom line,” said Muschkin, who serves as associate director for Duke’s Center for Child and Family Policy. “Our research finds that the effects of these initiatives for students are quite large and still paying off after students have completed almost four years of elementary school.”
The More at Four program, introduced in 2001, targets four-year-olds whose families have an annual income at or below 75 percent of the state median income or who are limited English proficient, disabled, chronically ill, or have a developmental need. Smart Start, which is available to all North Carolina children, has been in place since the early 1990s. The programs are recognized as national models for early childhood initiatives to address early academic disadvantage.
Read the Rest of this Article on Science Daily