In Shift, Supreme Court Moves Away From ‘Mental Retardation’ 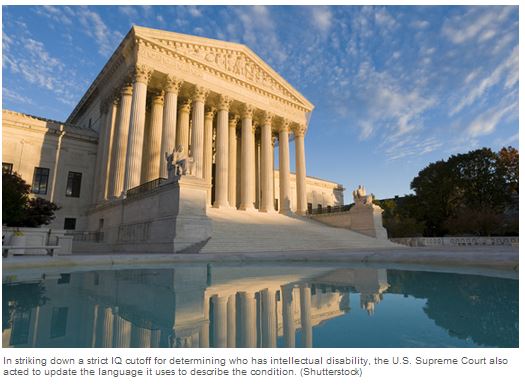 A recent U.S. Supreme Court ruling clarifying what constitutes intellectual disability also marked a major milestone in efforts to put an end to use of the term “mental retardation.”

For the first time ever, the nation’s highest court used the term intellectual disability in its decision last week in a case known as Hall v. Florida.

“Previous opinions of this court have employed the term ‘mental retardation.’ This opinion uses the term ‘intellectual disability’ to describe the identical phenomenon,” Justice Anthony Kennedy wrote in the court’s majority opinion.

In explaining the court’s change, Kennedy pointed to use of the updated language in the latest edition of the Diagnostic and Statistical Manual of Mental Disorders. Kennedy also cited Rosa’s Law, a 2010 act requiring “intellectual disability” and “individual with an intellectual disability” to be used in lieu of “mental retardation” and “mentally retarded” in federal health, education and labor policy.

The Supreme Court’s move to follow suit marks what may be the last major national institution to adopt language that self-advocates have been urging for decades.