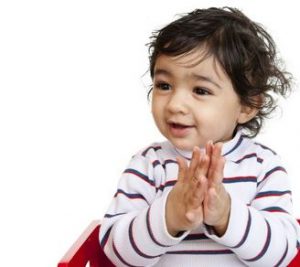 In a paper published in the journal Cortex, an international team of researchers in the UK and in Japan, including those at the University of Warwick, examined the electrical activities of the brain in 11 month-olds at the initial stages of word learning.

They used novel words (‘kipi’ or ‘moma’) to refer to pictures of a spiky or a rounded shape. They found the infants very quickly began to match the word to the image.

One of the authors, Dr Sotaro Kita from the University of Warwick said: “The oscillatory activity of the infant brainincreased when the word they heard matched the shape they were shown, compared to when it did not. This suggests that the infant brain spontaneously engages in matching visual and auditory input.”

An analysis of how different areas of the brain are communicating with each other also showed surprising results.

Dr Kita said: “Communication traffic between regions of the brain was light when the word matched the shape, but the traffic became heavy especially in the left hemisphere, where language is typically processed, when the word did not match the shape. The left

Read the Rest of this Article on Science Daily.com