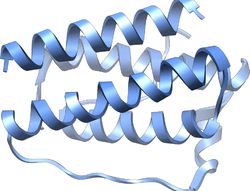 [Source:  Medical News Today]
Leptin – commonly dubbed the “fat hormone” – does more than tell the brain when to eat. A new study by researchers at The University of Akron and Northeast Ohio Medical University (NEOMED) shows that leptin may play a role in hearing and vision loss. This discovery, made in zebrafish treated to produce low leptin, could ultimately help doctors better understand sensory loss in humans.
While the scientists expected the leptin-deficient fish would be unable metabolize fat, “we did not expect that the leptin also affects the development of sensory systems,” says Richard Londraville, UA professor of biology.
Hormone’s powerful impact
“We discovered that leptin influences the development of eyes and ears in fish,” says Londraville, explaining how the popular hormone of study (the subject of about 30,000 reports since its 1994 discovery) also controls body temperature, immune function and bone density. The hormone’s newly discovered impact on the sensory systems of fish draws renewed interest to previous leptin research on mice, Londraville says. These studies revealed that leptin loss also affects eye and ear development in mice.
Read the Rest of this Article on Medical News Today