Play Centered Around Teen With Autism Wins At Tonys 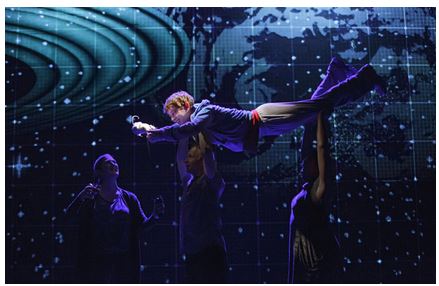 It dominated the Olivier Awards two years ago. It has become a box-office draw on both sides of the Atlantic. On Sunday, “The Curious Incident of the Dog in the Night-Time” continued its streak of success by taking home the Tony Award for best play.
“Curious,” which is based on the popular 2004 book by Mark Haddon, tells the story of a teenage boy who has a form of autism, following him as he investigates the death of a neighborhood canine. Simon Stephens adapted the original book for the stage.
The play debuted at London’s National Theatre in 2012 and later transferred to the West End, where it continues to run. The Broadway production, which is directed by Marianne Elliott, opened last fall at the Ethel Barrymore Theatre, where it is still running.
Elliott won a Tony Sunday evening for directing the play and Alex Sharp won best actor for portraying the teen at the center of the story.
For the Tonys, “Curious” faced competition from another British literary adaptation — “Wolf Hall Parts One & Two,” based on the bestselling Hilary Mantel novel — as well as the sleeper comedy “Hand to God,” an irreverent puppet-themed production that transferred from off-Broadway.
Read the Rest of this Article on Disability Scoop