Prevalence of Rett and Related Disorders

All material Copyright© 2008-2010 Rett Syndrome Research Trust
Reprinted with the express permission of Rett Syndrome Research Trust (RSRT) as originally published on their Website.
Rett Syndrome is classified as an autistic spectrum disorder along with autism, pervasive developmental delay, Asperger’s Syndrome (high functioning autism) and childhood disintegrative disorder. (Diagnostic and Statistical Manual of Mental Disorders, Fourth Edition – Revised
(DSM-IV-R)
In February of 2007 the Centers for Disease Control and Prevention (CDC) reported that the average prevalence of autism spectrum disorders in the United State is 1 in 150 children. Currently, over half a million children have a formal diagnosis of autism. The Autism Society of America predicts that the number will reach 4 million during the next decade.
The incidence of Rett Syndrome is estimated at 1 in 10,000 females; in the United States approximately 30,000 children and women affected (similar numbers to ALS, Huntington’s, and Cystic Fibrosis). Rett Syndrome is classified as a “rare disease” (by definition, less than 200,000 affected individuals in the US) by the Office of Rare Diseases of the National Institutes of Health. This designation qualifies the condition for orphan drug status with favorable tax deductions and marketing exclusivity on a drug for an extended time period.
In addition to Rett Syndrome, MECP2 abnormalities have also been found in cases of: 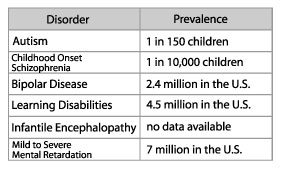 The sum of these disorders represents a huge unmet need for
new and efficacious treatments.

We now know that MECP2 duplications in males lead to a distinct neurological disorder with immune system complications. Geneticists suspect that MECP2 duplications may be a frequent cause of severe mental retardation in males. In fact, “MECP2 duplication syndrome” may be more common than Rett Syndrome.
With the recent knowledge that MECP2 mutations and duplications are found in a variety of disorders it is clear that research aimed at developing therapies specific to this gene will have an impact reaching far beyond Rett Syndrome. It has become evident that the number of individuals with “MECP2 Spectrum Disorders” who stand to benefit from MECP2 targeted therapies is far greater than originally suspected.
Featured Organization: Rett Syndrome Research Trust (RSRT)
Rett Syndrome Research Trust is a 501©(3) nonprofit organization intensively focused on the development of treatments and cures for Rett Syndrome and related MECP2 disorders. The strength of the Trust is based on the guidance of founders and advisors who are largely responsible for the major advances in Rett research over the past decade.
Please support our contributing organizations and visit Rett Syndrome Research Trust