SLP Corner: Tapping Into the Brain to Help a Paralyzed Man Speak 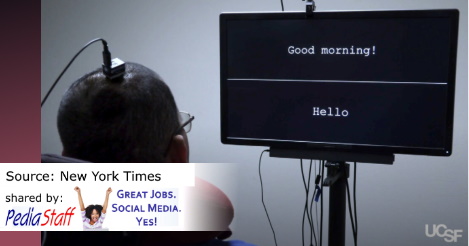 Editor’s Note:  While this is not an article about pediatric speech, we at PediaStaff thought this was such a powerful development that we decided it was worth sharing with you, regardless.

In a once unimagined accomplishment, electrodes implanted in the man’s brain transmit signals to a computer that displays his words.

He has not been able to speak since 2003, when he was paralyzed at age 20 by a severe stroke after a terrible car crash.

Now, in a scientific milestone, researchers have tapped into the speech areas of his brain — allowing him to produce comprehensible words and sentences simply by trying to say them. When the man, known by his nickname, Pancho, tries to speak, electrodes implanted in his brain transmit signals to a computer that displays his intended words on the screen.

His first recognizable sentence, researchers said, was, “My family is outside.”

The achievement, published on Wednesday in the New England Journal of Medicine, could eventually help many patients with conditions that steal their ability to talk.

“This is farther than we’ve ever imagined we could go,” said Melanie Fried-Oken, a professor of neurology and pediatrics at Oregon Health & Science University, who was not involved in the project.

Three years ago, when Pancho, now 38, agreed to work with neuroscience researchers, they were unsure if his brain had even retained the mechanisms for speech.