The Neuroscience of Human Vocal Pitch 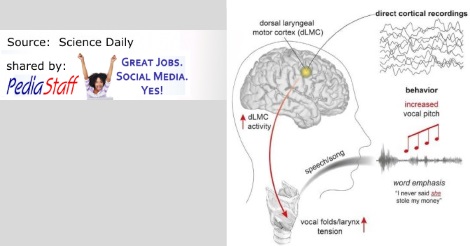 Among primates, humans are uniquely able to consciously control the pitch of their voices, making it possible to hit high notes in singing or stress a word in a sentence to convey meaning. Researchers narrow in on a region of the brain’s frontal lobe that controls the ”voice box” muscles that are responsible for vocal pitch.

“Our overall goal is to understand how the brain allows us to communicate through speech and language. In this particular study, we wanted to pin down how neural activity controls vocal pitch in the larynx when we talk,” says senior author Edward Chang, a neurosurgeon at the University of California, San Francisco. “It might have implications for understanding how humans evolved the ability to speak.”

Chang and his colleagues examined a region of the brain called the bilateral dorsal laryngeal motor cortex (dLMC), which is known to lie between the regions controlling the hand and mouth. They asked twelve participants to repeatedly speak the sentence, “I never said she stole my money,” changing the pitch of different