Worth Repeating: How Birds and Babies Learn to Talk 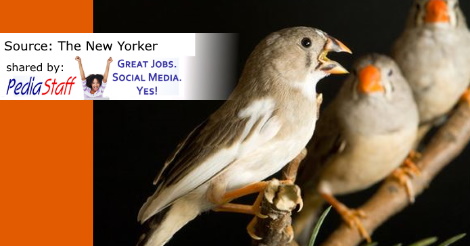 Few things are harder to study than human language. The brains of living humans can only be studied indirectly, and language, unlike vision, has no analogue in the animal world. Vision scientists can study sight in monkeys using techniques like single-neuron recording. But monkeys don’t talk.
However, in an article published in Nature, a group of researchers, including myself, detail a discovery in birdsong that may help lead to a revised understanding of an important aspect of human language development. Almost five years ago, I sent a piece of fan mail to Ofer Tchernichovski, who had just published an article showing that, in just three or four generations, songbirds raised in isolation often developed songs typical of their species. He invited me to visit his lab, a cramped space stuffed with several hundred birds residing in souped-up climate-controlled refrigerators. Dina Lipkind, at the time Tchernichovski’s post-doctoral student, explained a method she had developed for teaching zebra finches two songs. (Ordinarily, a zebra finch learns only one song in its lifetime.) She had discovered that by switching the song of a tutor bird at precisely the right moment, a juvenile bird could learn a second, new song after it had mastered the first one.

Read the Rest of this Article in the New Yorker