Worth Repeating: The Kids Who Beat Autism 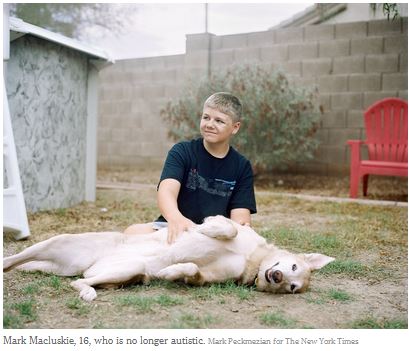 At first, everything about L.’s baby boy seemed normal. He met every developmental milestone and delighted in every discovery. But at around 12 months, B. seemed to regress, and by age 2, he had fully retreated into his own world. He no longer made eye contact, no longer seemed to hear, no longer seemed to understand the random words he sometimes spoke. His easygoing manner gave way to tantrums and head-banging. “He had been this happy, happy little guy,” L. said. “All of a sudden, he was just fading away, falling apart. I can’t even describe my sadness. It was unbearable.” More than anything in the world, L. wanted her warm and exuberant boy back.

A few months later, B. received a diagnosis of autism. His parents were devastated. Soon after, L. attended a conference in Newport, R.I., filled with autism clinicians, researchers and a few desperate parents. At lunch, L. (who asked me to use initials to protect her son’s privacy) sat across from a woman named Jackie, who recounted the disappearance of her own boy. She said the speech therapist had waved it off, blaming ear infections and predicting that Jackie’s son, Matthew, would be fine. She was wrong. Within months, Matthew acknowledged no one, not even his parents. The last word he had was “Mama,” and by the time Jackie met L., even that was gone.