You Are What Your Father Eats: Father's Diet Before Conception Plays Crucial Role in Offspring's Health, Study Suggests 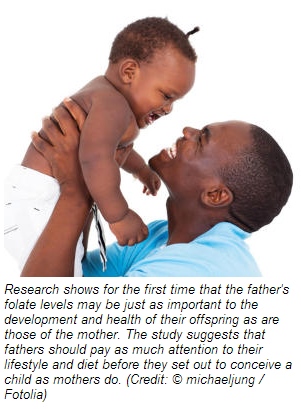 Mothers get all the attention. But a study led by McGill researcher Sarah Kimmins suggests that the father’s diet before conception may play an equally important role in the health of their offspring. It also raises concerns about the long-term effects of current Western diets and of food insecurity.
The research focused on vitamin B9, also called folate, which is found in a range of green leafy vegetables, cereals, fruit and meats. It is well known that in order to prevent miscarriages and birth defects mothers need to get adequate amounts of folate in their diet. But the way that a father’s diet can influence the health and development of their offspring has received almost no attention. Now research from the Kimmins group shows for the first time that the father’s folate levels may be just as important to the development and health of their offspring as are those of the mother. Indeed, the study suggests that fathers should pay as much attention to their lifestyle and diet before they set out to conceive a child as mothers do.
Read the Rest of the Article on Science Daily