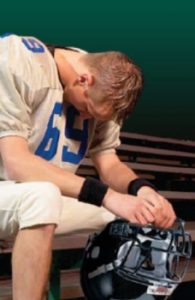 Further Reading and Information
Centers for Disease Control – http://www.cdc.gov/concussion/sports/index.html
National Athletic Trainers Association – http://www.nata.org/health-issues/concussion
National Academy of Neuropsychology – http://www.nanonline.org
Sports Neuropsychology: Assessment and Management of Traumatic Brain Injury
Edited by Ruben J. Echemendia, Ph.D., Guilford Press, New York, 324 pages, ISBN-10 1-57230-078-7
Consensus Statement on Concussion in Sport 3rd International Conference on Concussion in Sport Held in Zurich, November 2008 Clinical Jrnl of Sport Medicine 2009;19:185–200).
Featured Author: Shahal Rozenblatt, Clinical Neuropsychologist
Dr. Rozenblatt is clinical neuropsychologist specializing in the evaluation and treatment of children and adults who are experiencing problems with their thinking, emotions, behaviors or relationships that are due to neurological, mental health or learning problems. He received my Ph.D. in clinical psychology in 2003 from Long Island University’s Brooklyn campus and is licensed to practice psychology in New York State. He completed a 2-year post doctoral residency in neuropsychology and rehabilitation at St. Charles Hospital, in Port Jefferson, NY. He continues to serve as a staff neuropsychologist responsible for evaluating children and adults who are involved in treatment/rehabilitation following acute care of neurological illnesses, stroke or traumatic brain injury and of children and adolescents who are seeking services from the school due to learning or attention problems.
He specializes in the assessment of concussion in athletes and am a Certified ImPACT Consultant.
As a private practitioner, he continues to work with children, adolescents and adults who have neurological, psychological and learning problems, providing both assessment services and treatment. His practice has two locations: one is located in Manhattan and the other in Smithtown in Suffolk County.
Please support our contributing Authors and visit Advanced Psychological Assessment and NYSportsConcussion.com