Junior Seau's Death After NFL: Is There a Brain Injury Link?

Editor’s Note:   While the death of Junior Seau is not strictly a pediatric story, perhaps we as therapists of our youth need to be more vocal about the potential dangers of football with the parents and guardians of our kiddos. 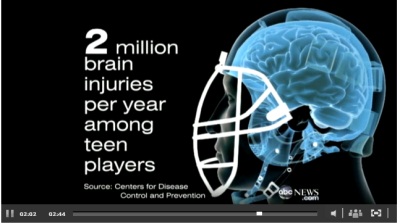 [Source:  ABC News]
The circumstances coming to light about the death of former NFL linebacker Junior Seau may highlight what some doctors see as a growing link between head trauma, mental illness and suicide, a connection that has come to the forefront of sports safety research in the last decade.
Seau was found dead from a gunshot wound to the chest at his home in Oceanside, Calif. Wednesday morning.
If Seau did indeed commit suicide, his death would bear a resemblance to that of other athletes in hard-hitting sports, including Chicago Bears football player Dave Duerson. Duerson shot himself in the chest in February of last year.
Read the Rest of this Story and Watch Video on ABC News