Kids Can Remember Tomorrow What They Forgot Today 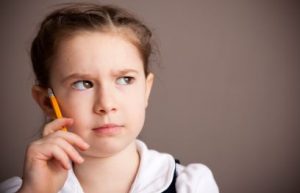 For adults, memories tend to fade with time. But a new study has shown that there are circumstances under which the opposite is true for small children: they can remember a piece of information better days later than they can on the day they first learned it.
While playing a video game that asked them to remember associations between objects, 4- and 5-year-olds who re-played the game after a two-day delay scored more than 20 percent higher than kids who re-played it later the same day.
“An implication is that kids can be smarter than we necessarily thought they could be,” said Kevin Darby, a doctoral student in psychology at The Ohio State University and co-author of the study. “They can make complex associations, they just need more time to do it.”
The study, which will appear in an upcoming issue of the journal Psychological Science, is the first to document two different but related cognitive phenomena simultaneously: so-called “extreme forgetting”–when kids learn two similar things in rapid succession, and the second thing causes them to forget the first–and delayed remembering–when they can recall the previously forgotten information days later.
Read the Rest of this Article on Medical News Today