By: Heidi Hanks
Copyright 2011. Reprinted with the express permission of the author as it appeared on her blog Mommy Speech Therapy 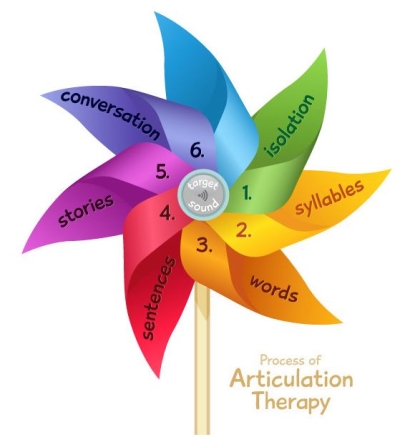 For those of you that have read some of my previous posts on how to teach specific sounds you may have noticed a pattern. That’s because when teaching kids how to say sounds there IS a general pattern I follow even though each specific sound changes. I wanted to outline this for you because if you understand this pattern, it will make teaching the sounds so much easier!
Before I get into the details of this process, please understand that there are many other factors that affect speech intelligibility such as hearing loss, apraxia, oral motor deficits, sensory issues, and phonological processes to name a few, but I will not be addressing any of these here. This post is intended to simply explain the basic structure of articulation therapy and how you can work with your child on their sounds.
So, let’s get started! The very first thing I want to know as a Speech Language Pathologist is what sounds does the child have difficulty with. As a parent you could probably list them without a problem. If you do need some help you may want to see a speech pathologist and they can help you identify them. They can do an articulation assessment that will tell you exactly what sounds your child is struggling with, what position of the word (begining, middle or ending) they are struggling with it in, and what sound if any they are substituting it with. They can also tell how your child compares to other children their age. So, after I have outlined the problem sounds I like to check for stimulability.
Stimulability
What is stimulability? A child is “stimulable” if he or she can say the sound in direct imitation of the therapist or parent. If the child is stimulable or can say the sound then you have cause to celebrate. That means your job is going to be so much easier! If the child cannot say the sound, you’ll have some work to do. You’ll need to teach them how to say the sound. This is called sound elicitation.
Sound Elicitation
Sound elicitation is the process you go through to teach the child how to say the targeted sound. For example, if a child cannot say the /th/ sound in imitation you break down the process for them. You might say, “Put your tongue between your teeth then blow.” After the sound is learned, meaning they can say it accurately in imitation of you then practice the sound in isolation.

Sound in Isolation
Practicing a sound in isolation means saying the sound all by itself without adding a vowel. For example, if you are practicing the /t/ sound you would practice saying /t/, /t/, /t/ multiple times in a row. The more accurate repetitions you are able to get your child to produce the better. I am satisfied with 10 accurate repetitions in a row. When you are satisfied they can say the sound in isolation you are ready to move on to syllables.

Sound in Words
At this point you have decided which position of the word you want to target and will begin practicing word cards in the initial, medial or final position of the word. I am satisfied with 80% accurate independent productions before I move on to the next step, which is using the word in a sentence. Meaning, I don’t count it as correct if the child says it in imitation of me. If I have to model a word for a child I will often put that word card back in the rotation for them to say again. After all the cards have been said we go back and practice the word cards that were in error.
There are so many ways to make practicing word cards fun. I sometimes make a snake and put a little incentive such as an m&m or a fish cracker every 3-5 cards. I have also fed the cards to puppets after they have been said, hid them around the room and gone on a hunt to look for them, as well as played memory, go fish and other fun card games. Be creative this makes it more fun for both of you!

Sound in Sentences
My favorite way to practice sounds in sentences is with a “rotating sentence”. In a rotating sentence only the word card changes. For example, your sentence might read, “Put ________ in pink purse.” Then you rotate all your practice cards through the sentence. This is an especially great way to practice sentences for young children who can’t read yet. They are able to memorize the sentence, or use visual cues to help them read it aloud. You are also able to maximize the production of your target sound when you use a sentence with two or three target words in it. You may find my sentences for the different sounds on the worksheets page.
With older children, I have them write their own sentences using their target words. When a child has articulated 16/20 or 80% correct I have them move to stories.

Sound in Stories
Practicing the sound in stories is not a step that is typically recommended. In fact it is more common to move straight from sentences to conversation. I have found that with the addition of this step I have more success moving the sound into conversation.
For my younger children I like to prepare a story for them to practice using the sound cards they have been practicing. You may use the stories I have created on my worksheets page. I try to include as many picture clues as I can so young children can retell the story without being able to read.
I have asked older clients to write their own stories using the word cards. They usually come up with very creative stories that are very entertaining for both of us.
After the child has mastered reading the story aloud with 80% accuracy I have them retell me the story without reading it. This is just another small step toward getting an accurate production of the target sound in conversation. Once they can do this I move them to conversation.

Sound in Conversation
In the therapy setting this step can be a little more tricky. I like to use a conversation jar. I have probably 200+ questions in my conversation jar that get my clients talking and telling me all about themselves. It also gives me a more controlled environment where I can track their progress in conversation.
For a parent, stimulating conversation is not usually a problem. I tell parents at this point in the process the parent has full license to correct an inaccurate production of the target sound in conversation. Hopefully, if we have done our job right, you shouldn’t have too many errors to correct.
A quick review… First practice the sound in isolation, then in syllables, words, sentences, stories and finally in conversation. When this pattern is followed the child has a greater likelihood of success. The only thing that changes in this process is how to elicit the different sounds. This basic pattern of how to teach the sounds remains the same.
I hope this will give you a good starting point in working with the “misarticulations” in your child’s speech. Remember to be patient, and to make it fun!

Our Featured Guest Blog/Author: Heidi Hanks of ‘Mommy Speech Therapy’
Thanks to Heidi and MommySpeechTherapy.com for sharing her blog post with us. Please support our contributors and visit MommySpeechTherapy.com
About Heidi and ‘Mommy Speech Therapy’:
My name is Heidi Hanks and I’ve been a practicing Speech-Language Pathologist since 2000. I am also the mother of three wonderful kids, Sam (8), Sophie (5) and our little red-headed tornado Sawyer (2). They are my sweet little ones. I have enjoyed every minute of watching them learn, and discover their world.
One of my favorite parts of being a mom is hearing them say their first words and getting some insight into what goes on in their little heads. I’m sure my fascination with their language development is in part because I am a Speech Language Pathologist, but becoming a mother has also magnified my desire to give them every opportunity to learn and grow.
The reason I named this blog “Mommy Speech Therapy” is because as parents we have the greatest impact on our children’s language development. No one can make a bigger difference than you!
My goal is to share some tips and techniques I have learned over the years in working with my clients and my own kids, and hopefully give you the information you need to be successful in helping your little ones become the very best communicators they can be.
My Education and Experience
I went to school at Utah State University where I completed both my Bachelor’s and my Master’s degrees. After I graduated in 2000 I started my first job at Kids on the Move, an early intervention program in Orem, Utah. I worked there until my first child, Sam, was one year old and then I decided it was time to spend a little more time at home with him.
I’ve been doing private therapy from my home ever since and it’s been a great transition. I love it! It gives me an opportunity to be a Mom, and still help children. It’s an adventure working with every child and my goal is to continue to learn more and improve my skills as a Speech Therapist so that I can see more of these kids progress and grow in their language development.
My hope is that you will find some helpful information on this site and that you might share this blog with other parents that would find this information helpful as well.