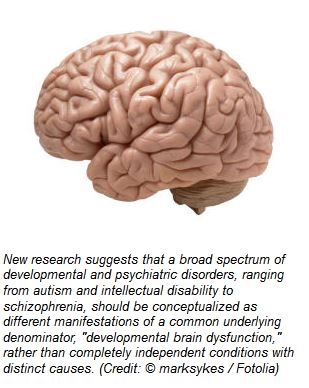 A paper published this month in the medical journal The Lancet Neurology suggests that a broad spectrum of developmental and psychiatric disorders, ranging from autism and intellectual disability to schizophrenia, should be conceptualized as different manifestations of a common underlying denominator, “developmental brain dysfunction,” rather than completely independent conditions with distinct causes.
In “Developmental Brain Dysfunction: Revival and Expansion of Old Concepts Based on New Genetic Evidence,” the authors make two key points:
• Developmental disorders (such as autism and intellectual disability) and psychiatric disorders (such as schizophrenia and bipolar disorder), while considered clinically distinct, actually share many of the same underlying genetic causes. This is an example of “variable expressivity:” the same genetic variant results in different clinical signs and symptoms in different individuals. • When quantitative measures of neuropsychological and neurobehavioral traits are studied instead of categorical diagnoses (which are either present or absent) and individuals are compared to their unaffected family members, it is possible to more accurately demonstrate the impact of genetic variants.
Read the Rest of this Article on Science Daily.com